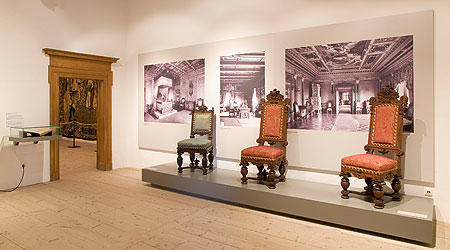 This room was once the location of the anteroom of an apartment furnished for King Ludwig II, which was destroyed by fire on 21 October 1961. Only a few items of furniture could be rescued from the ruins and restored. Together with historical plans and photographs they document the history and vanished splendour of the royal rooms.

In 1870 Ludwig II ordered the second floor of the Prince’s Building to be turned into a royal apartment. This accommodation in the Neo-Renaissance style comprised ten rooms, of which the king’s three state rooms were the most elaborate. Their magnificence and colourfulness is indicated by the carved chairs in walnut wood with original silk coverings that have been preserved from this time. There is also an artistically designed door lock by the locksmith Anton Gehrer.

The tiled stoves glazed in many different colours were also impressive features of the interior. The one in the royal bedroom has been recreated in its original size with a historical photograph and preserved tile fragments.

back to the gallery of the castle chapel 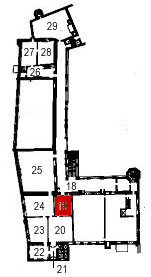 further on to the Tapestry Rooms